Dominance and Intelligence in dogs

This article could be considered second part of the whole picture on how to understand dogs. The mentality was first part with key components:

The complete picture would be seen after going through three factors which may interfere on the above components:

For better understanding I would use three examples and the below graphs, but first few words about each factor. 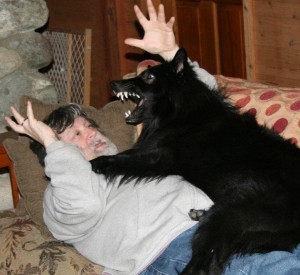 Dominance is measured on how to dog wants to be seen in the pack - to be the leader or the follower.

Intelligence is if the dog first thinks before acts and to what degree this is happening. 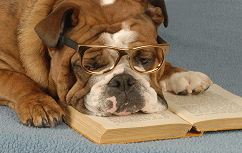 Temperament is whether your dog is usually calm or always wants the attention to himself.

The first factor "dominance" may affect the willingness to work, nerves and confidence by boosting them up. However such dogs need experienced handler (owner) in order to achieve bond with the handler.

The below chart uses different coding for the degree of the key component of the mantality along with the factors.

The second factor "intelligence" works on the dogs nerves and the more intelligent the dog is a better bond with the handler could be achieved. Also such dogs are usually more calm and confident. Thre is a downside of course, the willingness to work (the drive) is at lower level and this means there should be more work invested in the dog in order to reach greater sports achievments.

Below you can see example of a dominant dog having its default state without any training, somewhat taking them from the wild. For the purpose of charts the values passive, neutral and active are substituted with numbers from 1 to 3. The same is valid for the other components and factors. 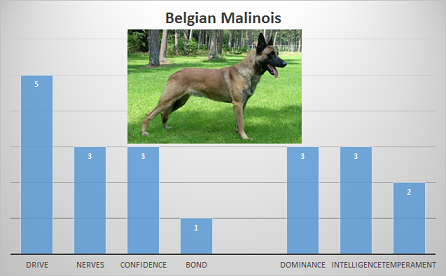 Very common mistake is to lose the bond with such dog and by doing this you lose the willingness to work, the drive. Good example for this could be seen in smaller dogs which are selected for hunting like the Jack Russell Terrier: 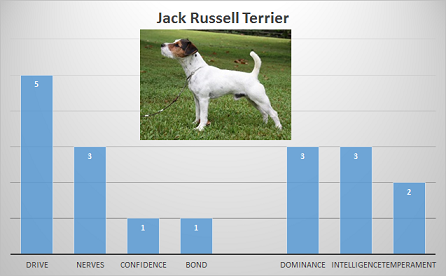 Despite the fact that jack russells are prefered by families, they need first very good bond or they become barking-all-the-time machines that chew everything.

My last example would be with Golden Retriever as I had the pleasure to live with one for an year. We trained with the dog to become the eyes of the visually blind in a local organization here in Bulgaria. 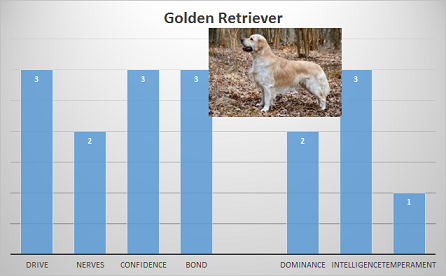 This dog is great family companion as its temperament very calm but still having enough drive to work. You can become very good friends with such dogs very easiliy :) 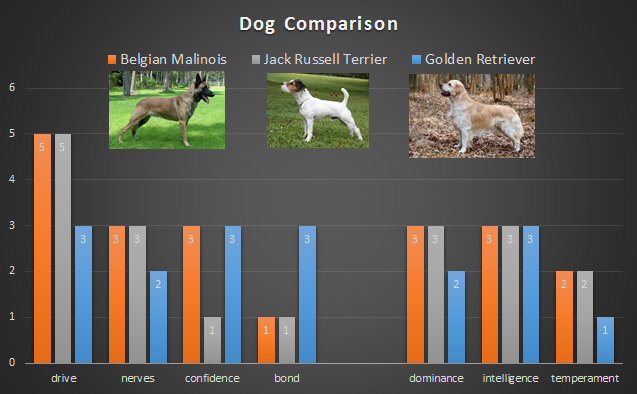 Summary of the lesson would be that if you change one bar (component or factor) of the equation called dog mentality another bar would also change. Using this data you can make the best choice for your new dog companion.

Tweet
Get more Joomla!® Templates and Joomla!® Forms From Crosstec